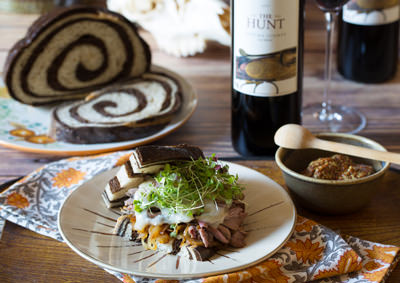 For the Pastrami Brine

For the Venison Pastrami

For the Caramelized Onions

For the Brine: In a heavy bottom saucepot bring all ingredients (except the ice) to a boil. Boil for 10 minutes. Then pour over the ice and cool until the brine is ice cold.

For the Venison Pastrami: Clean the silver skin off the venison and cut each backstrap in half.

Place the backstrap in two separate gallon zip bags. Pour one quart of brine in each bag to cover the venison. Zip each bag tightly and refrigerate for 2 days.

For the Caramelized Onions: Place the butter and onions in a large skillet over medium-low heat. Sprinkle with salt. Saute for 20 minutes, stirring regularly, until dark and golden.

For the Pastrami Sandwiches: Toast the bread on both sides and smear with mustard. Slice the venison pastrami into thin slices. Warm the pastrami and onions in a pan. Pile the onions and pastrami on the bread and place the Swiss cheese over the meat, so the cheese melts. Top with micro greens and a second slice of bread. Enjoy with a glass of The Hunt.

Request Guide
Get Your Free Guide to Asheville