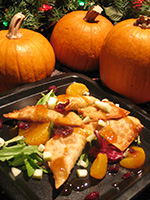 from Corner Oak Manor B & B
Pumpkin Waffles Ingredients

NOTE: Use unfiltered cider and fresh orange juice, and then strain the syrup before serving. Be sure to use a large saucepan for the syrup because it will foam up when you first bring it to a boil. How many waffles you get depends on the size of your waffle iron. If you want to really dress these up you can serve with whip cream or vanilla yogurt.

Get Happy for the Holidays in Asheville > Get more holiday recipes >