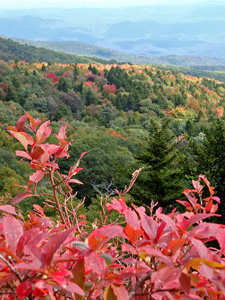 Starting September 13, FallintheMountains.com will post a weekly color snapshot of how leaf season is progressing in the Blue Ridge Mountains. Using insider tips, pictures, video and foliage updates from naturalists, attractions and park officials around the region, travelers can plan color-filled adventures for their fall getaway. For a sample of past color reports, check out the last weekly update from November 2009.

The Basics: Fall Color in the Blue Ridge Mountains

Located along the Blue Ridge Parkway and just outside Great Smoky Mountains National Park, the Asheville area is steeped in natural history and full of fall adventure. Extreme changes in elevation and hundreds of deciduous tree species, the largest variety in North America, combine for one of the longest and most vibrant leaf seasons in the country. The autumn colors create a mountain patchwork that varies from deep maroon, burnt orange and crimson, to almost neon shades of yellow, tangerine and raspberry.